You are in: Home / People / John Benjamin Smith MP 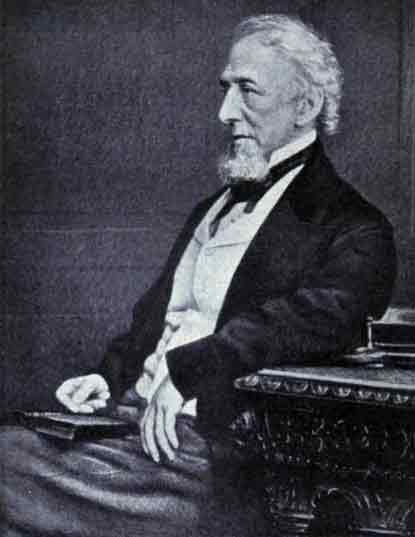 John Benjamin Smith (1794-1879) began his career as a cotton merchant but quickly became more interested in politics. He was an eyewitness to the events at Peterloo. A Liberal who became the first Chairman of the Anti-Corn Law League, Member of Parliament and JP. A patron of education and the arts, he lived at Belmont, Eccles Old Road for around five years.

Born in Coventry in 1794, the eldest son of Benjamin Smith, a throwster or silk spinner. Young John Benjamin was educated in Warwick. Contemporary news coverage tell us that his family moved to Manchester and on leaving school he “went to work in his father and uncle’s counting-house to learn the business of a cotton merchant”, becoming a partner in the firm in 1818 (‘Parliamentary Portraits’, Illustrated London News, 7 June 1851)

A brief biography was published as part of a history of Owen’s College in 1886. A reprinted copy in Manchester Library has some interesting handwritten notes by his daughter, Lady Edith Jane Durning-Lawrence indicating that the text was written by her husband Edwin.

Cotton merchant When the midlands silk trade became unprofitable, Benjamin and his brother Joseph went into business as cotton merchants in Manchester. John Benjamin was said to have ‘excellent business habits and accuracy’, and before he was 20 he attended a London sale of Indian cotton, bought himself £30 of stock and made a large profit.

The partnership was dissolved in 1826, when Benjamin and Joseph set up separate companies with their sons, based in Cotton Court, Manchester. Benjamin died in 1830, and by 1836 John Benjamin had made a large enough fortune to retire from business and focus on politics.

Eyewitness at Peterloo On 16th August 1819, Smith was working at the counting-house, when his aunt called in and asked him to accompany her to Mrs Orton’s house on Mount Street, Manchester. This was next door but one to Mr Buxton’s, where the Magistrates were assembled. In his account of the events of the day, Smith notes that as they arrived, the atmosphere on St. Peter’s field was one of a gala, with women and children dressed in their best. He observed to his aunt, “These are the guarantees of their peaceable intentions – we need have no fears”.

Smith witnessed unprovoked galloping into the crowd by the Manchester Yeomanry, led by Hugh Birley, by the 15th Hussars and by the Cheshire Yeomanry, ‘creating frightful alarm and disorder’. He was also present three days later at a meeting convened by the Manchester Magistrates to pass resolutions thanking magistrates and soldiers for their actions. Smith’s account makes it clear that the meeting allowed no dissent to the resolutions.

When he reported this in a local Gazette, a petition against the resolutions quickly gathered almost 5000 signatures. His role in helping expose the events of Peterloo won him respect beyond Manchester, and in 1821 he was presented with the freedom of the City of Nottingham.

John Benjamin Smith’s original manuscript of his observations are now in the Manchester archives, donated by his daughter, Dame Edith Jane Durnley-Lawrence. An extract, copied from Smith’s manuscript in 1913, appears in ‘Three Accounts of Peterloo by Eyewitnesses’ edited by F.A.Bruton, 1921.

Political career As a member and then President of the Manchester Chamber of Commerce he began campaigning in the late 1820s for free trade and the repeal of the Corn Laws. Over the next 10 years he worked tirelessly, helping found and fund the Manchester Anti Corn Law Association. Its Provisional Committee included Salford politicians Thomas Potter and Elkanah Armitage.

The Manchester Association soon became the Anti-Corn Law League, with John Benjamin Smith as its first Chairman, working alongside John Bright and Richard Cobden. At the opening of the original timber-built Free Trade pavilion on the site of Peterloo in 1840, Smith presided over a banquet of 3,800 supporters.

It was around this time that Smith moved in to Belmont at no. 15 Eccles Old Road. Records in Manchester Archives show that in 1835 he was living at Islington, Salford and working at Cotton Court, Manchester. An original letter from the Rev. Hugh Stowell was addressed to John Benjamin Smith at Pendleton in 1838.

Having failed to get elected to Parliament in 1837 (Blackburn) and 1841 (Walsall, where he was presented with a silver salver for his efforts), his health was suffering. He went abroad with his new wife, Jemina Durning, spending almost two years in Europe. On their return, she gave birth to their two daughters, Jemina in 1843 and Edith Jane in 1844. The following year the family moved from Belmont to Vicarage Field in Eccles.

He resumed his political activities and in 1847 was elected as Liberal MP for Stirling Burghs in Scotland in 1847.

In 1852 he was elected as Liberal MP for Stockport. John Benjamin Smith took a strong stand against slavery, supported the northern states in the American Civil War and argued that, “what is morally wrong, in our belief, can never be politically right.” He held the Stockport seat for 22 years.

Among the items in the Manchester Library is an invitation for John Benjamin Smith to dine with the Speaker at Westminster.

A handwritten of 1915 note by his daughter explains that this dinner invitation was,

“..the only occasion up to the present time when the words Full Dress was struck out…The object was to invite those of the Manchester School to attend who objected to wear the Court Dress. It was the only time that Smith, Cobden and others attended a Speaker’s dinner – “Punch” laughed so much that it was never repeated.”

Patron of arts and education Whilst in Rome in the early 1840s, Smith had stayed with the Marquis de Brancadori, and bought up his entire collection of 70 paintings. In 1860, Smith and his fellow MP in Stockport donated £1000 to build the Vernon Museum and Art Gallery. The first exhibits were 65 of these paintings, which Smith loaned and later gifted to the Museum.

Under the 1846 will of John Owens, John Benjamin Smith was named as a Trustee of Owen’s College. He was unable to take up the role as he didn’t meet a condition of residency. However, he did donate £1000 to fund an extension to the college. After his death, a Chair in English Literature was endowed in his name by his two daughters and son-in-law.

John’s philanthropy and patronage of the arts was continued by his two daughters, both of whom had been born in Pendleton. Jemina Durning Smith (1843-1901) made generous donations to medical establishments and endowed two libraries, the Lambeth Durning Library and the Ascot Durning Library. Jemina gave 10,000 guineas for the Lambeth library, designed by Tate Britain architect Sidney R J Smith; it is now a Grade II listed building.

His second daughter, Edith Jane Durning-Lawrence, donated to Manchester archives a large collection of her father’s manuscripts, correspondence and memorabilia.